1:
You won't believe the things I've seen
Far beyond your wildest dreams
I've seen chaos and order reign supreme
I've seen the beauty of the universe
So peaceful and serene
In seconds turn to violence and screams
I've seen true genius,
Too often elude the meaningless
Appreciation of this mediocre nation
I've heard the mindless repetition,
Of empty words without tradition
Turn original verbs into submission
I smelled this malignerance addiction,
But I guess I wouldn't be right
If I said the blunt was like a baby pipe
There ain't gon' be no revolution tonight
Half my warriors as high as a kite
Lost and they lost all they fight
And I've tasted, the bitter tragedy of lives wasted
And men who glimpsed the darkness inside, but never faced it
And it's a shame that most of y'all are followin' sheep
Wallowin' deeper than the darkness, you're fallin' asleep

I've seen and experienced things
That'll push the average to the edge and swan dive to death
I'm two guys, multiplied by ninety-three guys
Evenly balanced seein' evil equally in each eye now
Maybe I'm the most thorough worker on the job to you
Or maybe I'm the one, who was plottin' to rob you
The fear of this beatdown, the women on no cash to floss
Makes most of y'all hustle y'alls ass off
From nothin' to two mill', in five years I'll live to see it
Vanish in six months, with no tears believe it
I'll rock, twenty-eight years before the Feds can lay a trace
See they plan is to erase me, just to replace me

CHORUS:
Life! Your heart is one with your brain
Emotional or reason, now which one do you obey?
Life! Somebody callin' you insane
When overwhelmed and blessed, burst in tears of happiness

Yo, yo, I've seen relationships that's so sick
Life long friendships so cha-o-tic
Thug cat bangin' this chick but won't kiss
Drinkin' her spit, when coppin' a fix for dope bliss
I got a knife and a bat, to bust your brain, put a knife in your back
Once in a life I was trifle like that
Like my man Troy, who lost his days
Shootin' dice on worldly ways
And ended up in an early grave
Because once in a lifetime is rough
Twice in a lifetime you combat the ghost of mistrust
Mentally cuffed, thrust by a cop thinkin' he tough
You bust, Amadou Diallo is us, and what
Now I'm on my knees, beggin' God please
Save me from the fires of Hell
Let water water soul prevail
'Cause I can't take no more
Who's that knockin', at, my door?
Is that you, Pete from Cobb's Creek, who died in my sleep?
We was playin' for fun, now it's keeps
Like my man Mark I beat to death wrapped in a carpet
And left in the garbage, now that's cold-hearted
Ask Book he saw it, "Yo black I ain't seen (sh*t)
Kids in the 6, they flip for nonsense"
Poke an icepick, smokin' that (sh*t) since preschool fool
And packin' a tool, (f*** you) Mom Dukes it's cool 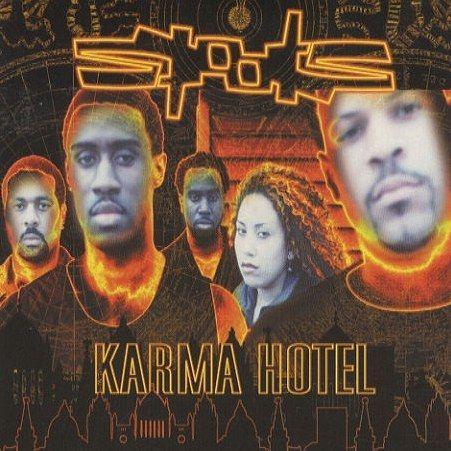