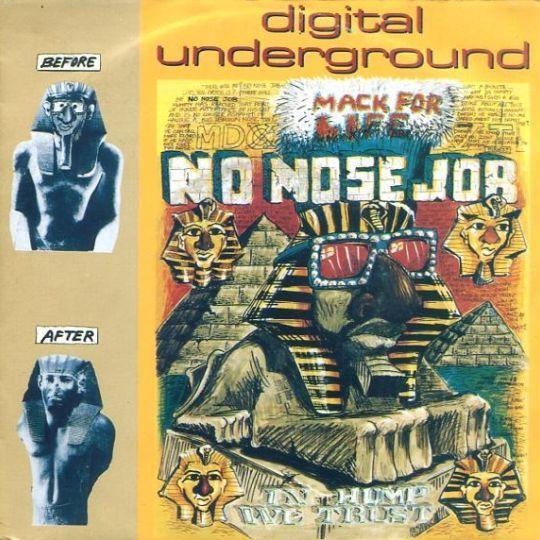 Dr Cook]
Ruth, send in the next patient

[Chorus x4]
Dodio-doe, there'll be no nose job
Said dodio-doe, no nose job (smarter than that)

[Baby D/Humpty-Hump]
People say, yo Humpty now that your records is sellin
Ain't it about time for you to be bailin out
Of the race and community you come from
Yo, your face has gotta change, Hump!
Ice Cube says you're making more than Donald Trump
So yo, go on and get your nose fixed, Hump

Dr: Sit down
HH: Wait a minute, uh-uh
Dr: Get in the chair

[Humpty-Hump]
Listen, now the black girl wants to get her lip tucked
She says Doc, I want my slim hips so I'm a slim figure
The white girl says my hips are not big enough
And yo, Doc, inject the collagen and make my lips bigger
All of these so-called celebrities
Sellin millions of records and claimin no responsibilities
A young girl sees you on a TV show
She's only six, says "Mama, I don't like my nose!"
Why'd you have to go and mess up the child's head
So you can get another gold waterbed?!
You fakehaircontactwearinliposuction carnival exhibit
Listen to my rhyme, you need to hear it

[Humpty-Hump]
Uh, and you don't stop, check it
I smell the message from the TV
Does my Humpty nose deceive me?
Smells like the blacker the wacker
Polly wants to be a cracker, if you let her
But see for me, the bigger the nose the better
They say the lighter the righter
Oh yeah?! Well, that's tough
Sometimes I feel I'm not black enough
I'm high yellow, my nose is brown to perfection
And if I was to change it'd be further in that direction
So catch me on the beach, I'll be gettin a tan
Make sure there's no mistake that
Humpty-Hump is from the motherland
Layin in the sun, string bikini
Between the buns of two cuties
Still mackin, there'll be no nose job

[Baby D]
Come on, Humpty, let's get out of here

Dr: Hi, Humpty. My name is Dr Cook, I'll be handlin your surgery today
HH: Uh, surgery?! Ain't no surgery, said I don't want none
Dr: Yeah, but you're gonna be a big star
HH: Star? Look I'm already a star
Dr: A huge star, kid
HH: Y'all don't understand, man
Dr: Big, really big!
HH: So what, I don't wanna
Dr: Yeah, get his legs
HH: Put me down, put me down!
Dr: Come on, Humpty, don't worry about a thing, don't worry about it
HH: No, no!
Dr: Calm down, you're going to be fine..
HH: Hey!
Dr: Come on, sedative (sedative)..scalpel (scalpel)
HH: Sedative! Scalpel!
Dr: Knife (knife), Gauze pad (gauze), and gimme a little tape (tape)
Dr: Okay, he'll be alright..don't worry about it
HH: [gibberish]
Nr: You're falling asleep, Mr Humpty..